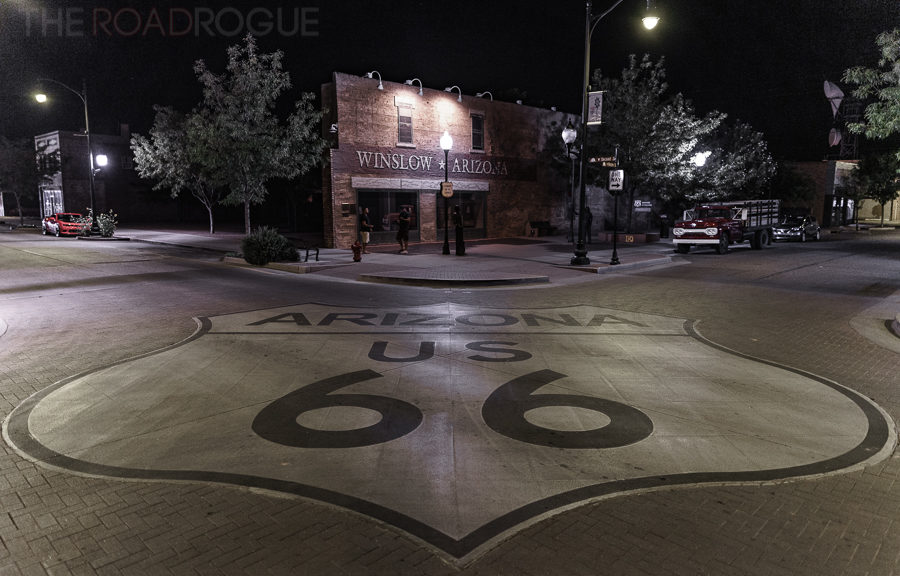 I have come to Winslow, Arizona seeking the most famous corner of the most legendary road in the world. A corner immortalized in the Eagles’s first single from their eponymous debut album. A corner emblazoned with a Route 66 shield so enormous it can be spotted easily by travelers running down the road, eagles soaring overhead and, I am certain, astronauts in orbit.

I arrive to such a fine sight: a classic American rock song brought to life.

Standing on the corner is a bronze statue of Glenn Frey, the Eagles’s recently-departed frontman, who wrote the song Take it Easy that features the lyrics about Winslow. Across the road, a flatbed Ford and its ogling driver appear as song lyrics made real. Tracks from the Eagles greatest hits blare from somewhere on the corner in constant, never-ending rotation. Standin’ on the Corner Park is not Winslow’s only charm. There’s the Old Trails Museum—closed this late at night. I could visit the famous La Posada Hotel, a Southwestern architectural jewel built adjacent to a railway station in 1930. Or maybe I will dine tonight at the Turquoise Room, La Posada’s award-winning eatery.

But the song’s lyrics echo through my head; I may never be here again. So instead I find myself crossing the street to a small cafe on the opposite corner. I order up some coffee and crepes, and take it easy.