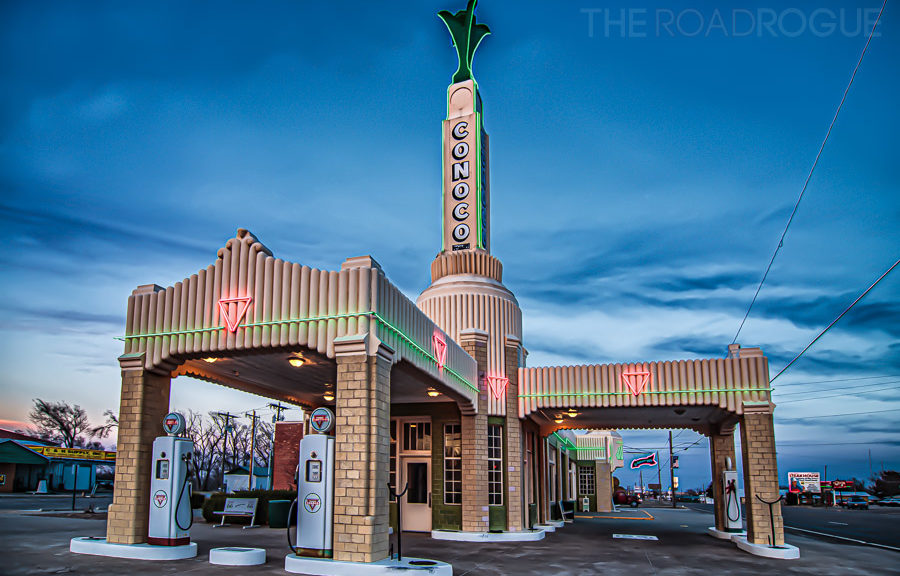 I arrive at the crossroads of Route 83 and what was once Route 66 to a bizarre view. In front of me, on the desolate streets of the tiny town of Shamrock, Texas, is the baffling existence of a 1930s-era Art Deco jewel disguised as a gas station.

I walk the perimeter of the station. It appears either remarkably untouched by the ravages of time. In fact, it had fallen into disrepair before being meticulously restored in 2003.

Grass green and orange-cream soda colored ceramic tiles cover the structure’s lower exterior walls, with the fascia above the roofline is fluted in classic Art Deco style. Colored lights—originally neon, but replaced with LEDs some years ago—shine along the perimeter of the building after dark. Two towers rise from the structure: The smaller tower over the U-Drop ends with a green ball; the taller one, over the Tower Station, is crowned with a metallic tulip, another recurrent Art Deco motif.

How is this here? Why is it here? The Tower Station and U-Drop Inn was designed to house two separate ventures within one structure. And it did, many years ago; the Tower Station was a double-bay gas station, while the U-Drop Inn offered meals to travelers on Route 66. Like so many other landmarks along the Mother Road, the Tower Station’s decline into disrepair mirrored the ruin and eventual death of Route 66 itself. But the station was added to the National Register of Historic Places in 1997, brought back to life shortly after and featured prominently in Pixar’s Cars. A replica lies 1160 miles to the west, in Disney California’s Cars Land.

There are other treasures here. The restored Magnolia service station, another reminder of Route 66’s glory days, is several blocks away. Next door is the Pioneer West Museum, home to an even older era.

But neither match the sheer surrealism of grand Art Deco architecture in a 21st-century Texas village.