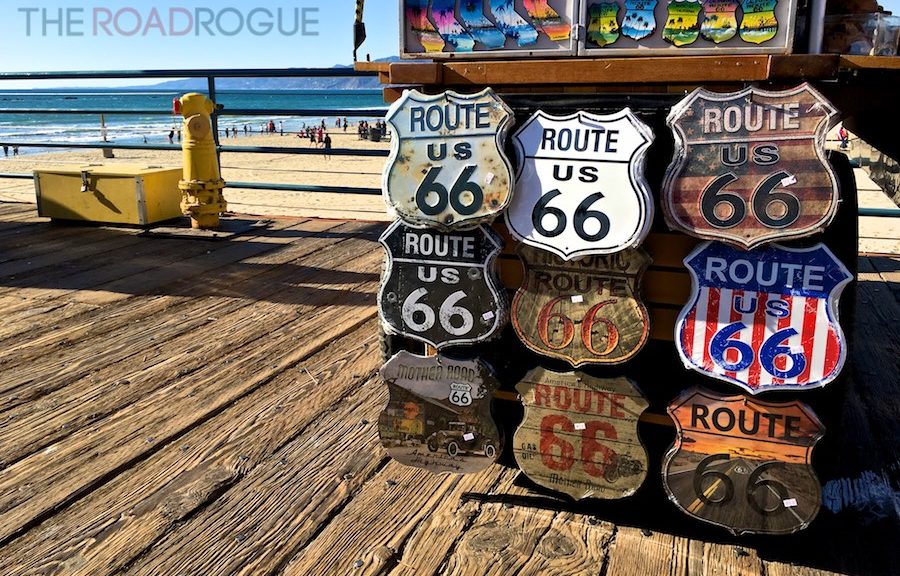 From afar, nothing hints at the Santa Monica Pier as the western end of Route 66. The pier is far removed from the vast, archaic emptiness that characterizes the rest of Route 66, and there are far too many distractions—the beach, the dizziness of Santa Monica and the novelty of the pier, a world-class landmark in its own right—for it to feel like a part of the grand old highway.

But a closer look reveals signs that it was once the western anchor of the highway. Signs, quite literally: A small cart sitting on the side of the pier, almost completely obscured by a variety of colorful Route 66 signs and handmade fridge magnets; just a short walk away is a booth hawking t-shirts emblazoned with Route 66 signs. And then the most obvious vestige of the pier’s Route 66 pedigree, a small signpost marking the “End of the Trail” at roughly, I reckon, the point where the water meets the sand beneath the pier.

Except, none of it is real. Like Santa Monica itself, the signs are the stuff of theatrical illusion.

Nothing hints at the Santa Monica Pier as the western end of Route 66 because, until nine years ago, it never was. During the Route’s existence, all 2,500-odd miles of the highway came to an abrupt end about a mile  inland, on the corner of Lincoln and Olympic Boulevards, where the celebrated Penguin diner once welcomed the route’s travelers at the end of the road.

Then in 2009, 83 years after the route was born, and two dozen years after it ceased to exist, organizations associated with the Santa Monica Pier and Route 66 proclaimed the middle of the pier as the end of 66, and marked the spot with the previously mentioned sign. The sign itself is a replica of what may, or may not, have originally been a movie set piece, and was initially placed near the entrance to the pier along Ocean Avenue. Does it matter? I have said before that each Route 66 traveller must chart their own course. I might begin my voyage from the corner of Lincoln and Olympic after a coffee and hearty breakfast at Mel’s Drive-In, which now inhabits the glorious, Googie-inspired shell of the old Penguin Diner, under the beloved penguin sign  that still stands vigil. But I hunger only for adventure, and the bracing ocean air leaves me far more awake than any cup of java would.

So I begin at the pier, beyond the End of the Trail sign even, at the very end, where the weathered pine planks drop off into the blueish waters of the Pacific. 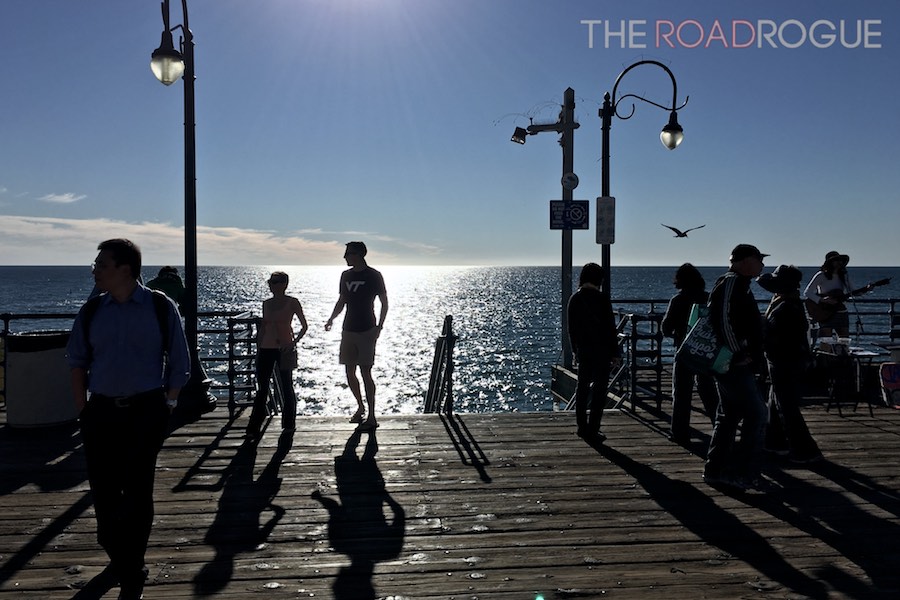