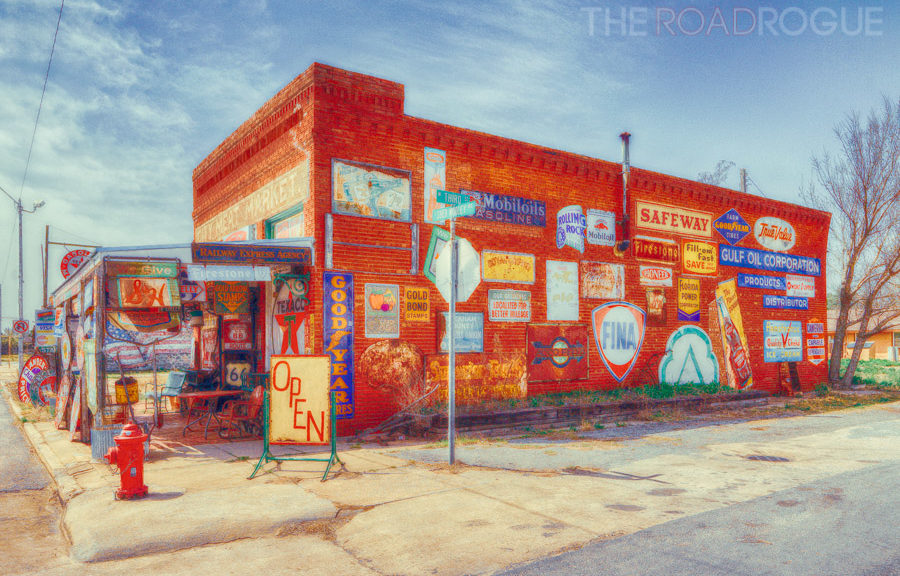 I have come here in search of the Jester of Route 66, a man who lives in what he describes as his Redneck Castle. I find him in an ancient butcher shop encrusted with an exoskeleton of vintage signs, in the middle of the sun-baked Oklahoma village of Erick.

Encrusted. If there were ever an occasion to employ this word in description of signs stuck to a wall, it is here, gazing up at the tin-plated exterior of the Jester’s castle: the Sandhills Curiosity Shop. All manner of ancient metal devices and logos plate the red brick exterior, as if covering it in a suit of medieval heraldic armor.

I step through the doorway, and into what can only be described as the most densely packed treasure room of Americana mojo in existence. And there, amidst the relics, is the Jester. He introduces himself as Harley Russell with loud, boisterous welcome, and instructs me, and the Midwestern couple who wandered in at the same time, to make ourselves at home.

In contrast to his armor-clad castle, Harley himself wears nothing but denim overalls. There is some banter between the Midwesterners and Harley, which ends abruptly when he insists on playing for everyone, and grabs a guitar. It appears the Jester is also a bard. Harley warns me to start shooting video before launching into an indefatigable, raucously over-the-top rendition of Bobby Troup’s Route 66. We cheer enthusiastically.

The Midwesterners eventually leave to warm goodbyes, and I am left jawing with the Jester. His collection of signs is the real deal, each brought here from across the country. Harley himself has hunted for some; others are gifts from visitors who know of Harley’s passion for vintage tin Americana. The building itself, which Harley calls his Redneck Castle, but also a sanatorium—a subtle hint about the electric eccentricity that surrounds Harley and the shop—was originally the City Meat Market, and may be the oldest building in Erick.

It is difficult to tell whether Harley is playing a character, an exaggerated version of himself, or not. But as we chat on, a lurking melancholy reveals itself behind the outlandish character. He talks a little about life with his wife Annabelle, and her passing, a few years ago. They had originally turned the shop into a health-food store, and evolved into an entertainer duo who called themselves the Mediocre Music Makers. At one time, Harley ran a Martin guitar dealership from the shop.

In the years since his wife’s death, the Jester has maintained the gregariously warm hospitality offered by the pair since they began. We shake, and I walk toward my ride. I realize this last stop is the one I will remember most vividly.

I am nearing Oklahoma City, where I will diverge from Route 66. My plotted course takes me further east, beyond the point at which Route 66 splits with Interstate 40, to follow Interstate 44, northwest toward Chicago.

For now, Route 66 and I will part ways. It may be kismet that my last stop will be with its most memorable character.