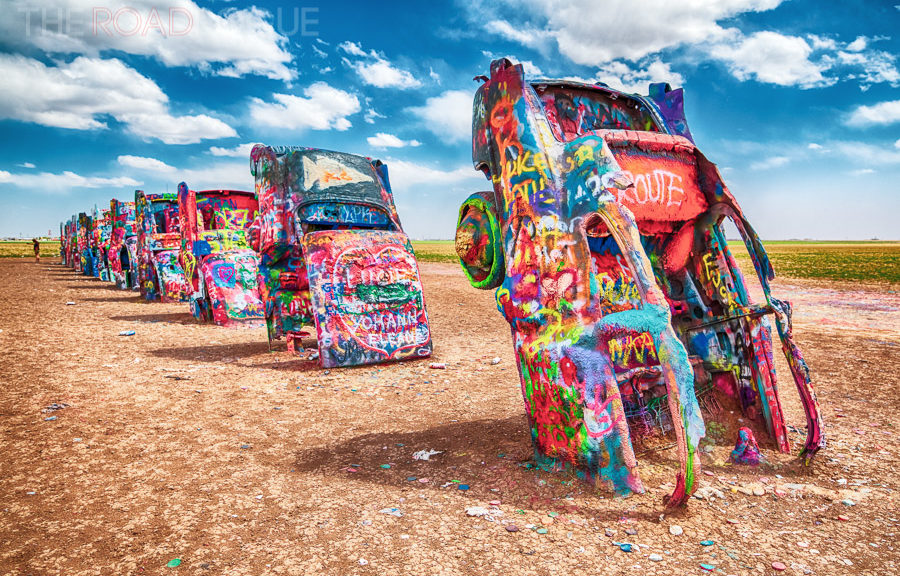 Just outside the outskirts of Amarillo lies a dusty patch of dirt, not too unlike countless other patches of dirt on the unending plain of the Llano Estacado escarpment. To the north of this dirt is the highway. To the south, the pancake-flat horizon stretches for miles, undisturbed—save for the abrupt appearance of 10 psychedelic monoliths, stabbed like daggers into the earth.

I walk through the iron gate of the Cadillac Ranch and head toward the distant waiting row of upended Cadillacs, my boots stirring dust as they land on the cracked dirt. The cars have been here since 1976, when a San Francisco-based architecture and art collective that called itself Ant Farm marooned the finned behemoths here on the Texas Panhandle.

Each is covered in a thick armor, spun from layer upon layer upon layer of graffiti. Cans of spent spray paint litter the ground where the vehicles erupt from the soil. The Caddies range in age from the early ‘40s through the late ‘60s, though I imagine identification would be difficult through the paint, even were I a Caddy aficionado.

Even as I stand gazing at this bizarre monument, others are spray painting their own glyphs onto these ever-changing forms. I leave them to their work and tread back to my own ride.