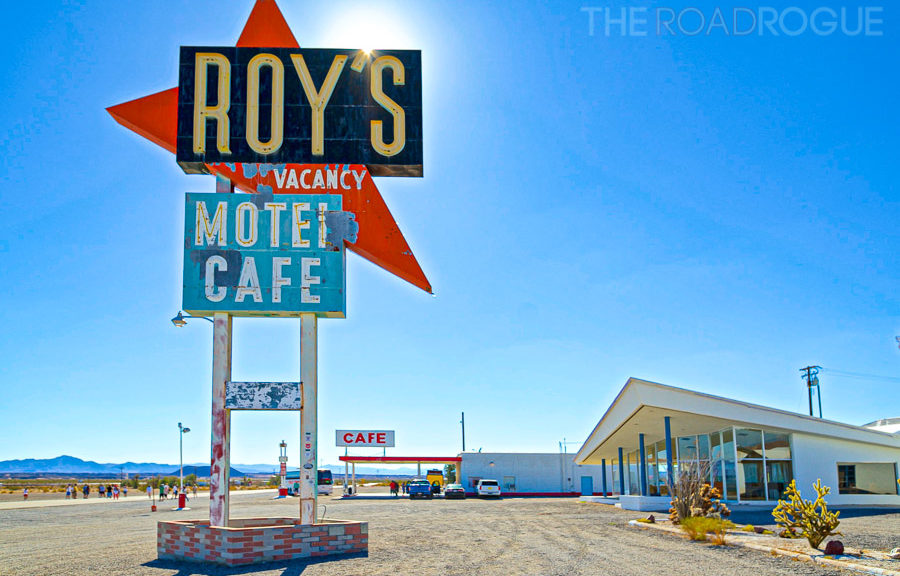 Amboy. There are many strange places along Route 66. Amboy is by wide margin the strangest.

Miles from anywhere, anything or anyone, Amboy is a giant sign rising alone from the desert; a sign that says both “Roy’s,” and you have gone too far, turn back.

This is not hyperbole—the number of seemingly unrelated, peculiar anomalies that greet me here suggest this place is somehow a powerful magnet for the surreal.

Amboy is one of the original alphabet towns, the informal term for the alphabetically named dusty railroad stops that sprang up in the late 1880s, all of which are now dying or long-dead: Amboy, Bagdad, Chambless (or, depending on whom you ask, Cadiz—another nearby named place that competes with Chambless for the “C” spot), Danby and Essex. Amboy is the only of these with any apparent activity.

Amboy’s inescapable focal point is a giant sign looming over a gas station, and what seems to be a diner. A throng of Spanish-speaking tourists, disgorged from their behemoth tour bus, mills about languidly on the hot black asphalt beside the station. Some congregate around a Route 66 emblem baking on the tarmac, snapping photos of one another lounging in the middle of the road, beside the giant shield.

Directly across the road sits an unexplained sphere formed of polished metal dishes, and in the distance past it, separated by a yet more dirt and dust, is a small church. I wander inside the diner and discover it is not a diner, but simply a sparse gift shop offering tepid coffee and Route 66-brand root beer. I choose the soda.

The attendant manning the till tells me the place once thrived, but died of thirst decades ago when the village’s water supply, which arrived by train, suddenly stopped appearing. He says the man who now owns Roy’s is in the process of restoring the motor lodge and diner to its former glory, and that the lodge’s small rooms are open to examine. I am curious, and cross the dirt lot to the small building.

The rooms are tiny. Inside one, I find nothing but a mattress. In another, a cryptic sign. A third contains only a large hook hanging menacingly from a beam above me. At the back of the compound is what appears to be an abandoned airstrip, though perhaps it is still in use; Amboy is, after all, the site from which a Los Angeles-based chauffeur and amateur rocketeer oddball named “Mad Mike” shot himself into the sky on a rocket—in an effort to prove the Earth is flat. My unease grows. I have had my fill. As I head east from this vortex of strangeness, I remember something I thought I glimpsed on the way in, and double back. Yes, there it is; a few miles west of Amboy, a field of blue-black volcanic rock appears from nowhere. In its center, is a crater, the remains of an extinct volcano.

I turn east again, just as a strange thought enters my head. Maybe this ominous, jet-black mound is somehow the unseen force at the center of the unnatural phenomena in Amboy? An idiotic notion. Yet I cannot shake it. 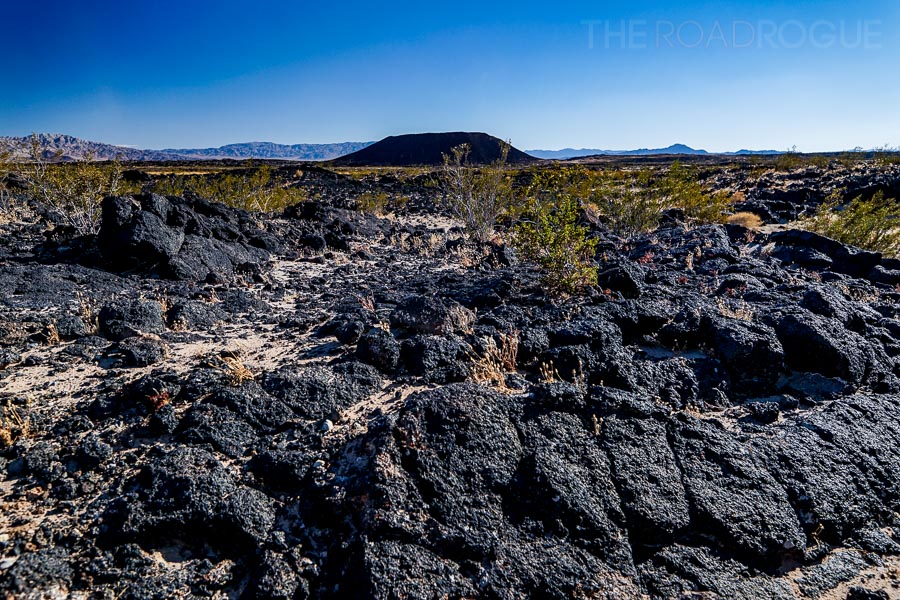