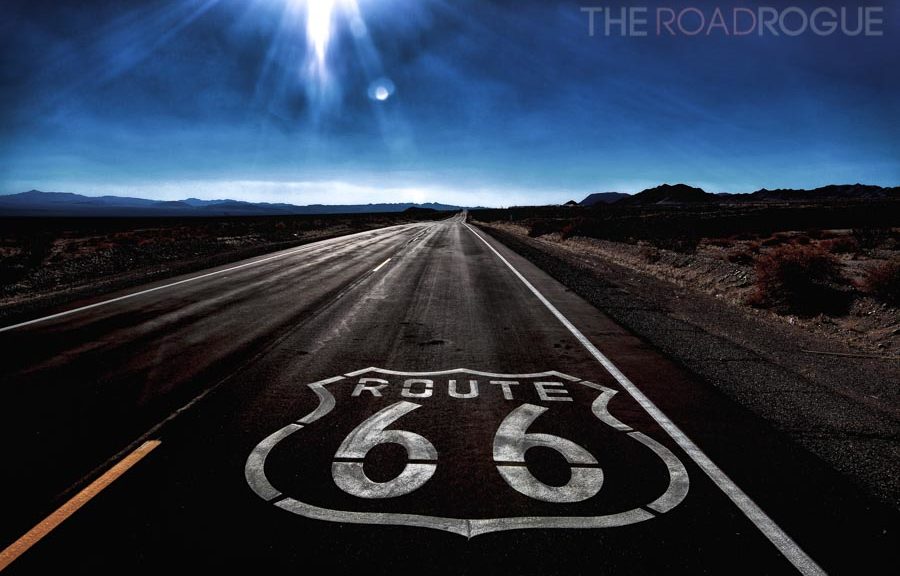 The road calls. This particular road. Maybe the most famous road in all the world. A long black ribbon that has gripped the imagination of travelers and road warriors since its birth—but even more so since its death.

Route 66 was born in the winter of 1926, stitched together from dozens of separate highways and roads by a man from Tulsa, Oklahoma named Cyrus Avery. Thirteen years later, after the Great Depression had roiled through the nation and spurred westward flight along this not-yet-mythic highway, John Steinbeck named Route 66 The Mother Road, in chapter twelve of “The Grapes of Wrath.” And so  the Route’s mystique grew.

For most if its life, the length of Route 66 hovered at around 2500 miles; any definite figure would theoretically only be accurate for a brief moment of the Route’s existence, as the snaking ribbon’s shape and length were in almost constant flux as bits and pieces were added, subtracted or rerouted along its path.

But the launch of FDR’s Interstate Highway System in the 1950s spelled the beginning of the end for Route 66. Interstates 40, 44 and 55 rolled over much of Route 66, and simply bypassed the rest.  When the very last segment of I-40 was completed in 1985, just west of the Texas-New Mexico border, Route 66 was decommissioned and ceased to exist as a route. In the years since, lonely segments of the road have been paved over, fallen into disrepair, renamed, or even repurposed into private drives. Some have simply disappeared.

But some segments yet exist. Very soon after the route was decommissioned, a champion for Route 66 came forward: a barber named Angel Delgadillo, who campaigned to preserve some of what was left, and helped guide travelers back to the places made desolate by the Interstates. The route’s mystique grew larger—and passed into legend.

To this very day, the Mother Road draws pilgrims from all over the world. Each pilgrim forges their unique odyssey, quilting together their own saga from the broken bits and pieces of the legendary road.

And now the road calls to me.